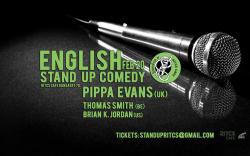 We are back!We hope you’ve missed us because we are extremely proud to present you another awesome line-up. February’s show is somewhat unique because it’s not every month we have a world class Oliver theater and Chortle award winner on our stage. Get your tickets if you want to join us on tuesday February 20 for a fun night out and some of the best beers Belgium has to offer.Line-up:Pippa Evans (uk):Evans is an award-winning comedian, actress, songwriter and improviser.A multi-talented and incredibly versatile performer, Pippa has taken 6 shows to the Edinburgh Fringe, bagging a nomination for Best Newcomer in 2008 for her debut show. Since then she has gone from strength to strength, performing regularly on BBC Radio 4 as well as on hit TV shows such as Alan Davies: As Yet Untitled and Comedy Central’s Drunk History. Pippa sold out shows on the Melbourne comedy festival and the prestigious Just For Laughs in Montreal. She brings some of the best and sharpest musical comedy we’ve ever seen!


Thomas Smith (uk/be):
Smith is one of belgium's most inventive comedians. He has a fast paced comedy style and most of it is improvised on the spot, think Ross Noble with a way better wardrobe. He had several sold-out theater tours and 2018 marks his first official year as a Belgian. He turned in his British passport and Brexited before it became all the hype!

Brian K. Jordan (us):
Jordan has developed his own style of storytelling comedy. They say that part truth is involved in most comedians’ stories, and Brian is no different. IF you figure out which parts of his stories are true, they could shock you.

As usual you can book tickets by mailing us: standuprits@gmail.com or through our website www.comedybrussels.com Pre-sale: 12 €, at the door 15€, students 5€ RITCS café - Dansaertstraat 70 - Tuesday Februari 20- Start 20h